Many women and men carry their abortion experience in the dark recesses of their soul. They do everything in their power to shroud the secret from others and the guilt, shame,and remorse associated with abortion from themselves. Sadly, the means used to avoid detection are more disastrous than exposure:  self-destructive behavior such as substance abuse, eating disorders, promiscuity, being in abusive relationships, gambling, over-protectiveness of living children or the opposite, etc.

I visualize the tools (coping skills) used to conceal the secret as volcanic magma.  As time passes, weaknesses in the earth’s crust can no longer hold back the magma, and a catastrophic eruption occurs. As one tool stops working, the world crumbles and ushers in hopelessness, fear, and depression resulting in the use of another, which starts the vicious cycle all over again.

The only way to stop the debilitating aftermath of abortion is to summon the courage to reach out for healing.  Removing the shroud of secrecy will allow the light of love and forgiveness from our merciful God and Savior, thus replacing the guilt, shame, and remorse with peace and serenity.

Take it from one who knows….

The Pedestal of Perfectionism 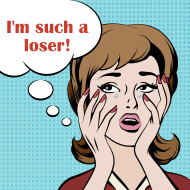 Recently I had some work of mine reviewed.   Flashbacks of when I was in the workforce facing the dreaded “annual performance evaluation” sent chills vibrating down my spine. The fear victims experience in my recent suspense series pales in comparison to the terror I felt sitting down in my manager’s office as he shut the door.

I always fared extremely well in those evaluations and should have been ecstatic. BUT although 99% of the feedback was positive I would invariably zero in on the 1%, beating myself up over it.  Why? Because my name is Patti, and I’m a perfectionist.

Focusing on the1% stripped away every ounce of joy I had in my accomplishments. The joy morphed into fear and doubt. Fortunately, later on in life, I had a supervisor who cared enough to knock me off that pedestal of perfectionism by pointing out the 1% did not represent failure, but an opportunity for growth.

The same curse of perfectionism attacks me spiritually. When doing my daily examination of conscience, I beat myself up because once more I have sins to confess.  Growing anger and disappointment tempts me to throw my hands up and accept the fact I’m a total loser. I even told my priest that during one of my trips to the confessional.  He just smiled and reminded me of Ecclesiastes 7:20, “yet there is no one on earth so just as to do good and never sin.”  He added that God does not want us to wallow in guilt or disappointment, but learn from our mistakes, strive to do better and move forward in faith.

Pastor Rick Warren also has wise words on the topic:  “If you struggle with perfectionism, then ask God to help you deeply understand that he loves you unconditionally,” which brings me to this wonderful quote: 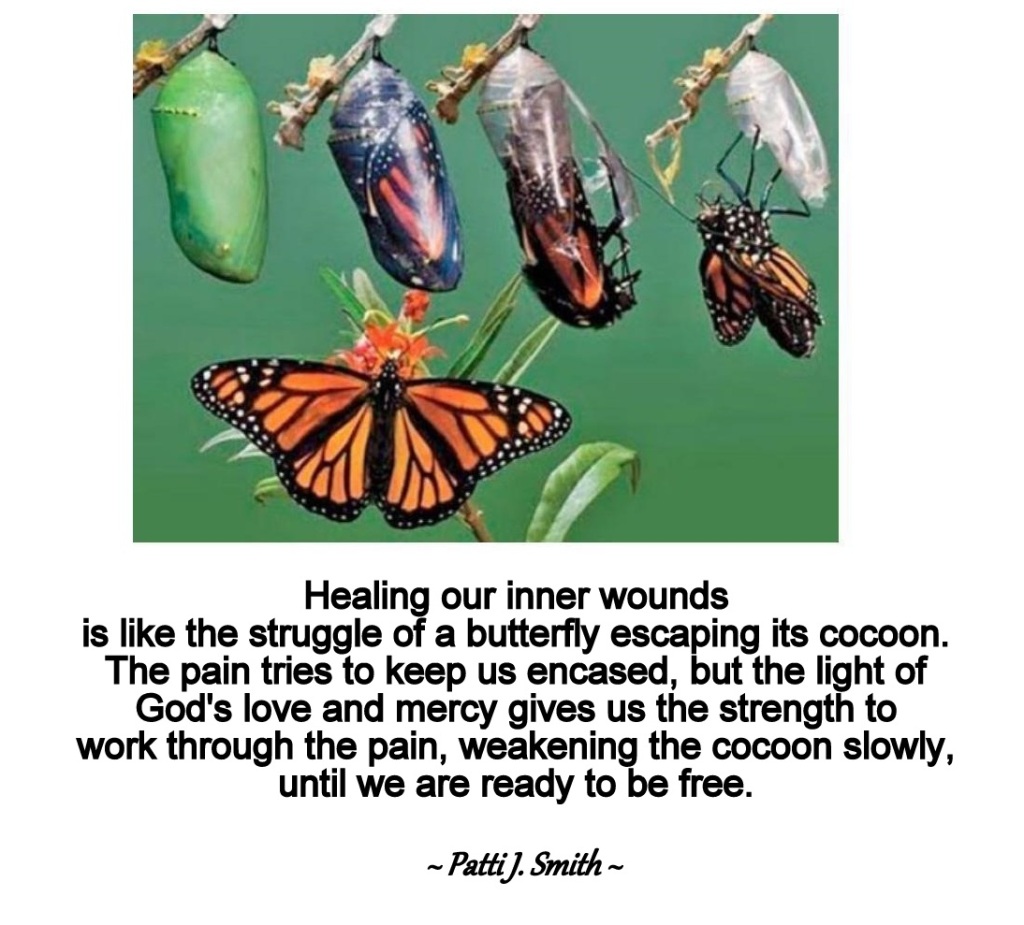 Part of the healing journey may involve reevaluating  relationships and their impact on our emotional well-being.

For several decades, I’ve had a fragile and contentious relationship with someone close, faults assigned equally.  At some point, I decided it was time to offer up the olive branch.  I pulled up my big girl panties and took responsibility for my part in our differences.  Although I heard no reciprocal words of apology, I let it go and moved forward with renewed hope the fracture was permanently sealed.The peace lasted for about two years when my hopes diminished, finding out I was covertly maligned, everywhere, including social media.  I received hateful messages from people who believed the lies, including some I considered friends.  The betrayal by someone I should be able to trust and lean on was devastating, and anger rose … but not at the perpetrator … at myself.  You see, this wasn’t the first time being hoodwinked.  This last transgression was the proverbial straw that broke the camel’s back.  The last remnants of trust evaporated from my heart, and I said to myself, “NO MORE.”

It’s sad to let go of someone that should be an integral part of my life, but I finally realized that some things just couldn’t be fixed, and continuing attempts to rekindle such a brittle relationship would invariably reap the same results.  It reminds me of the saying, Fool Me Once – Shame on You, Fool Me Twice – Shame on Me.  We should always give people a second chance, and possibly a third, but then it’s time to surrender.  If our side of the street is clean, we shouldn’t have to cross over to their side, time and time again, just to get run over.

My priest once told me there are people that are so toxic they can inflict emotional as well as spiritual damage which will eventually draw us away from God.  He assured me it was okay to protect myself and close the door as long as it was without malice or thoughts of retribution … and most importantly, done with forgiveness in my heart.

Something we should always remember: 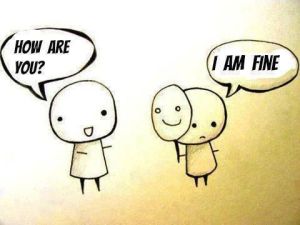 I’m guilty of it, as with many others (glad I’m in good company). For some reason, we are afraid to voice our true feelings. Either we don’t want to bother anyone with our fears or problems, we don’t think they’ll understand, or we don’t want to appear weak. Whatever the reason, unless you have a therapist at your beck and call, you need to talk to somebody.  Sure, if your boss or an acquaintance walks up to you and asks that dreaded question, it might not be appropriate to engage in a lengthy dialog. Or, if someone asks you on social media – not a good idea.  I’m referring to our trusted family members, friends or clergy.

Pretending everything is okay works for awhile, but eventually whatever is causing anxiety will simmer, bubble then boil over … making it worse.  If we reach out when the issue first surfaces, more times than not, it will be resolved.  If not, then at least we have someone there to offer advice on where to turn.  No one should struggle alone.

Do you know what “FINE” stands for?

Saint John Damascene tells us, ““The day of the Nativity of the Mother of God is a day of universal joy because, through the Mother of God, the entire human race was renewed, and the sorrow of the first mother, Eve, was transformed into joy.”

As Christmas approaches, my heart overflows with gratitude towards the Blessed Mother because:

Sadly, there are many women and men who find the Christmas season difficult because they said “No” when finding themselves faced with an unexpected pregnancy.

I used to experience a deep sadness at Christmastime because it was the biggest reminder of how I failed God, my children as well as myself.  I thought of my babies every time I saw baby Jesus in the manger or in the arms of the Blessed Mother.  The regret was paralyzing.

If it hadn’t been for an after-abortion healing program, I would have continued to find myself saddened when viewing a nativity scene or images of the Blessed Mother with Baby Jesus and still considered myself a failure in God’s eyes.  I now fully embrace Christmastime, in fact, I have a collection of nativity scenes and have statues of the Holy Family and the Blessed Mother with Baby Jesus on my fireplace.

Through healing, I came to understand that because of Mary’s “Yes,” redemption for what I considered an unforgiveable act was there for the asking.  And because of God’s loving mercy, and Mary’s inspiration of faith and courage, I am able to speak out in an attempt to prevent others from saying, “No.”

“…for all have sinned and fall short of the glory of God, being justified as a gift by His grace through the redemption which is in Christ Jesus” …  Romans 3:23-24

If you are struggling with your decision to abort, please visit Rachel’s Hope Healing Ministry in San Diego or the Silent No More Awareness Campaign  for healing resources in other locations,  including internationally.

You are not alone.

There is good and bad on social media, especially in these trying times.  Once in a while, though, you come across something that speaks right to your heart.

How true those words are … they apply to the women and men who have experienced physical, emotional or spiritual trauma of abortion.

It is human nature to bury the shame, guilt, and remorse … a defense against re-experiencing it.  That is why it is so important to reach out for help in dealing with abortion trauma and be freed from the pain and anguish that has taken up so much valuable space in your souls … making room for indescribable peace, serenity, and joy.

“He will wipe away every tear from their eyes,

and death shall be no more, neither shall there be mourning,

nor crying, nor pain anymore, for the former things have passed away.”

We are all sinners; we are human, after all. Turning back the hands of time to reverse our words or actions is impossible.  All we can do is ask for forgiveness and move forward, resolving to do better.  That’s all well and good; however, how many times do we receive forgiveness from God and others yet still wallow in guilt by recounting the transgressions in our minds, over and over again?  Why is it so easy to give forgiveness than to accept it?

Being an overachiever in the mistake department, I struggled with accepting forgiveness for many years, especially for my abortions. Why?  Because I could not forgive myself.  No matter how hard I tried to move on, I continued to browbeat myself unmercifully … hating myself for what I did to my children, isolating myself from  family and friends I had hurt, and worse yet, isolating from God … feeling unworthy to be in His presence.

Through after-abortion healing and a renewed relationship with God, my faith grew leaps and bounds and relationships improved.  Now, whenever tempted to dwell on past transgressions, I play a little mind game.  I picture Satan with a DVD of my failings.  He’s cackling and sneering while continually hitting the replay button …  an evil attempt to imprison me in guilt and remorse, separating me from loved ones and distancing me from God.  Seeing that image puts everything in perspective and brings a smile. I’m able to  laugh and say,  “You’re playing a blank disk, Satan … God and I have already hit the delete button.”